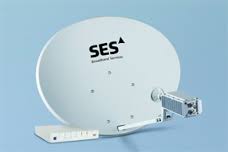 SES Astra has added 3G to the suite of services it can offer, demonstrating 3G voice and data services via its Astra2Connect satellite broadband platform. But the user cannot be mobile, with the technology needing a home gateway to work.
Astra Broadband Services said the service would work with any 3G mobile device such as phones and laptops, using Pirelli’s 3G femtocell home gateway attached to an Astra2Connect satellite modem via s plug-and-play Ethernet connection.
The system is especially suitable for customers in areas with poor or no terrestrial broadband and provides ISPs marketing ASTRA2Connect with the opportunity to add femtocell to their portfolios.
Femtocell uses the Astra2Connect link as backhaul into the service provider’s network via the Nokia Siemens Network Femto Gateway, a specialized node that is part of the Nokia Siemens Networks 3G Femto solution.
As well as allowing customers in areas with poor cellphone coverage to use their mobiles via satellite, it enables mobile operators to increase the use of 3G services, and improve the convergence of fixed and mobile communication.
Norbert Willems, Managing Director of Astra Broadband Services, said: “The success of ASTRA2Connect since its launch over two years ago demonstrates that the system is ideal for homes and businesses in remote areas with limited or no terrestrial DSL access. So we are delighted to be working with Pirelli Broadband Solutions and Nokia Siemens Networks to deliver indoor 3G coverage to households where there is no terrestrial reception. I am confident this collaboration will be highly successful.”
© Rapid TV News 2009